New Mural at the Kiosk from Anastasia Tantaros!

Greetings Everyone,
Recently Mirkwood's kiosk got some new work from Anastasia Tantaros.

Anastasia is a BFA graduate of West Chester University and is currently working as a wedding and event photographer in Baltimore. Anastasia says, "I dedicate a portion of my life to street photography, capturing offbeat portraiture and uncommon vistas in Baltimore, Philadelphia and the surrounding areas.  You can see more of my street photography and professional work on her website here":  www.side-a.com. 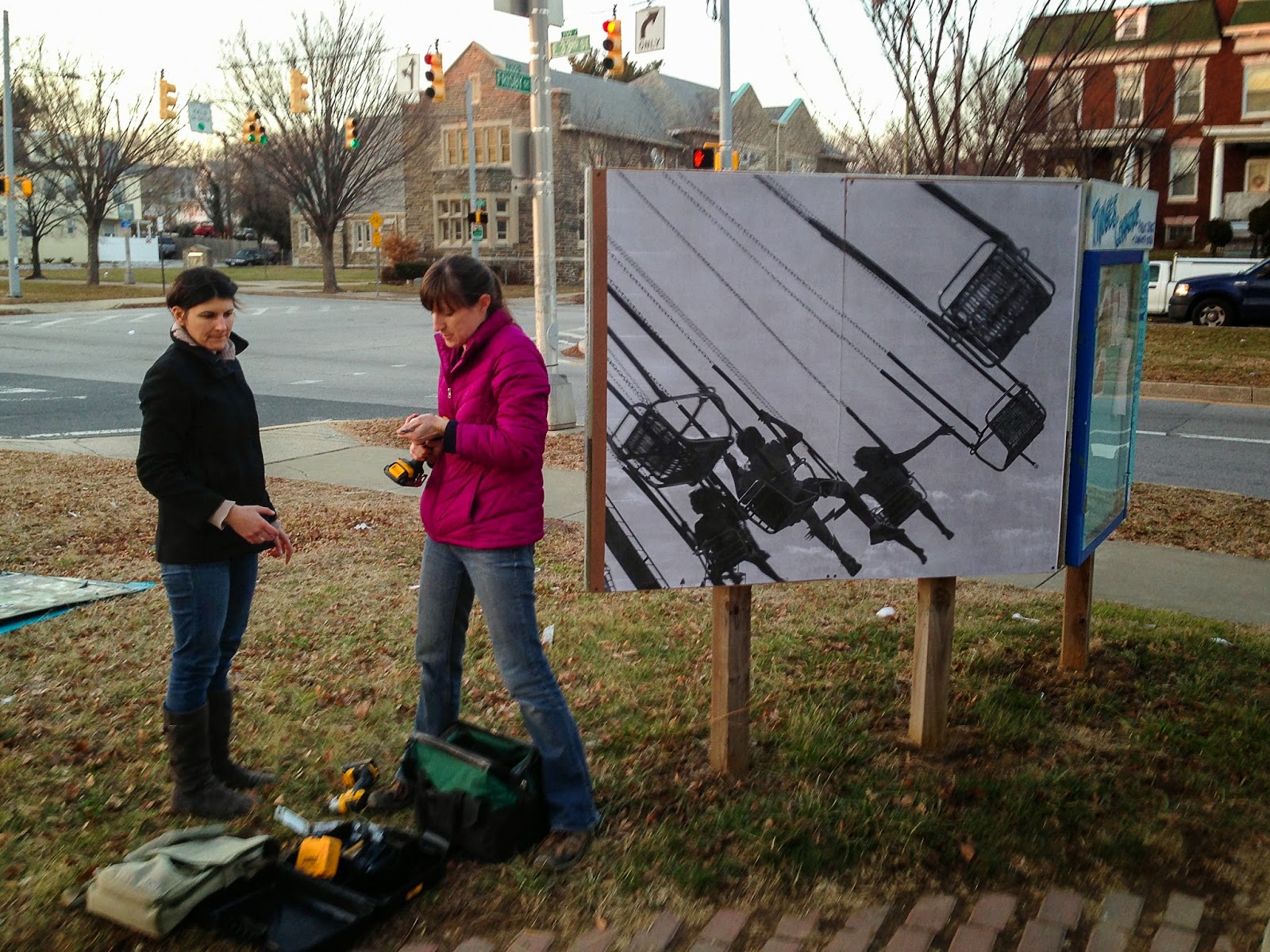 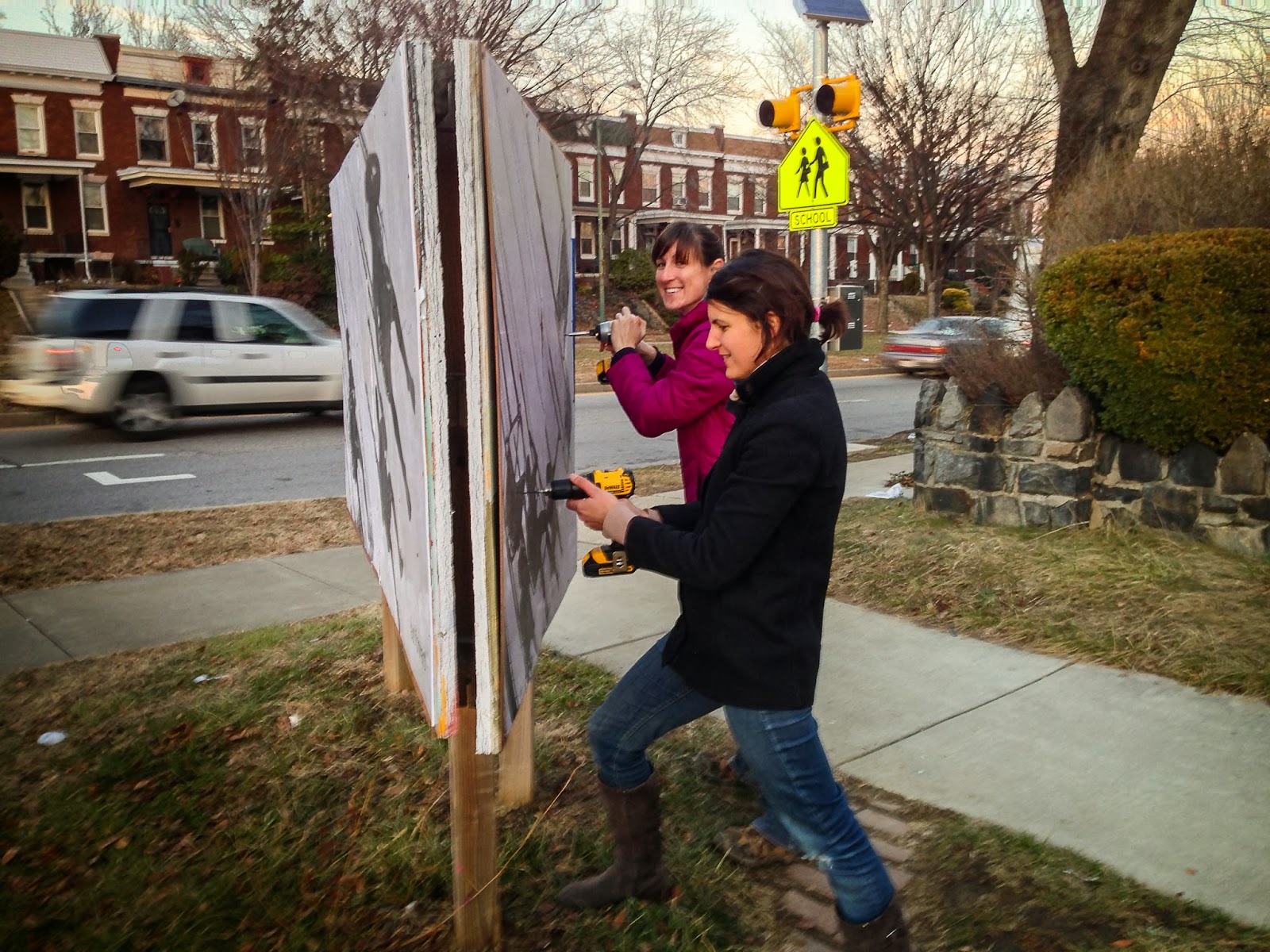 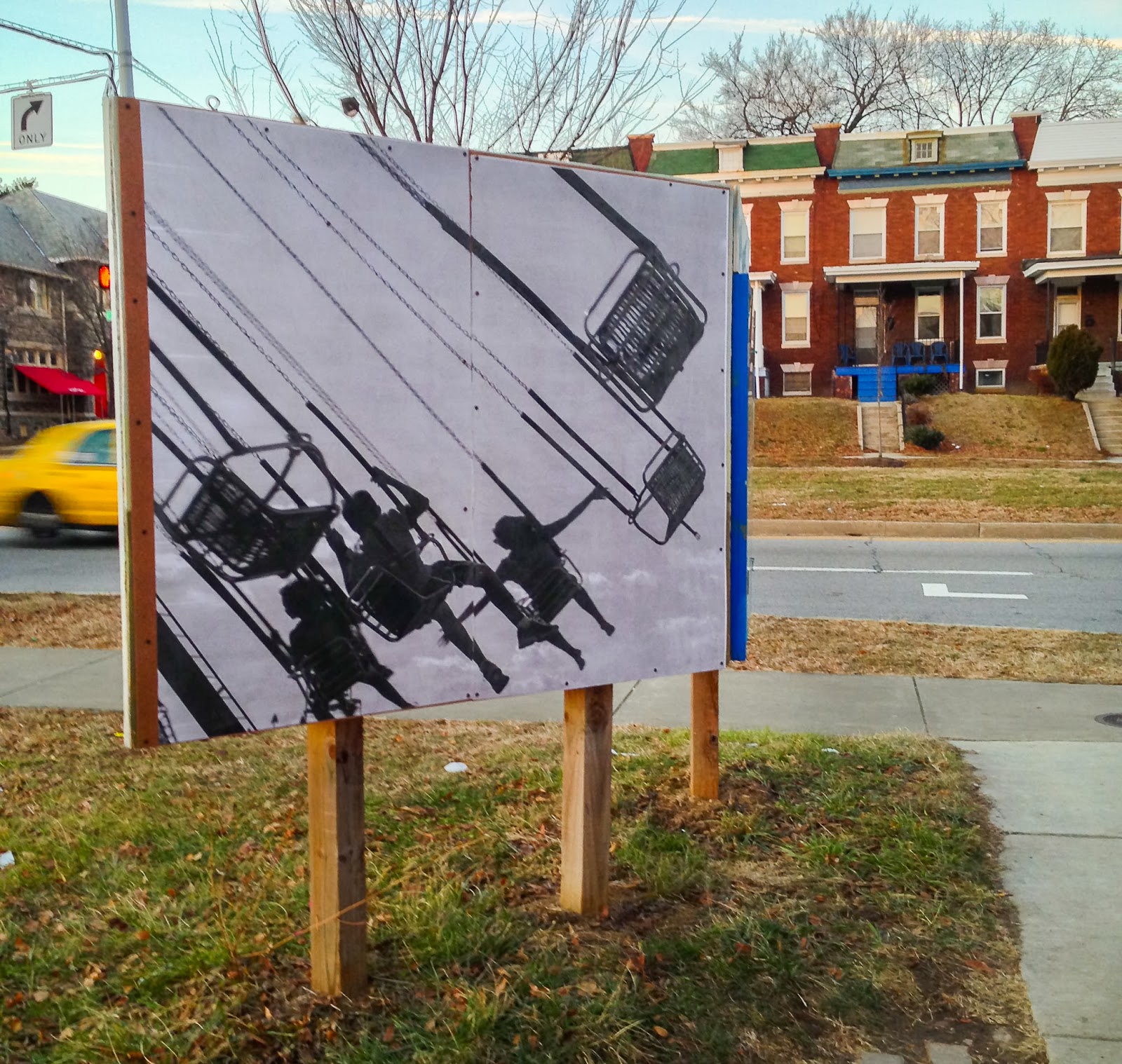 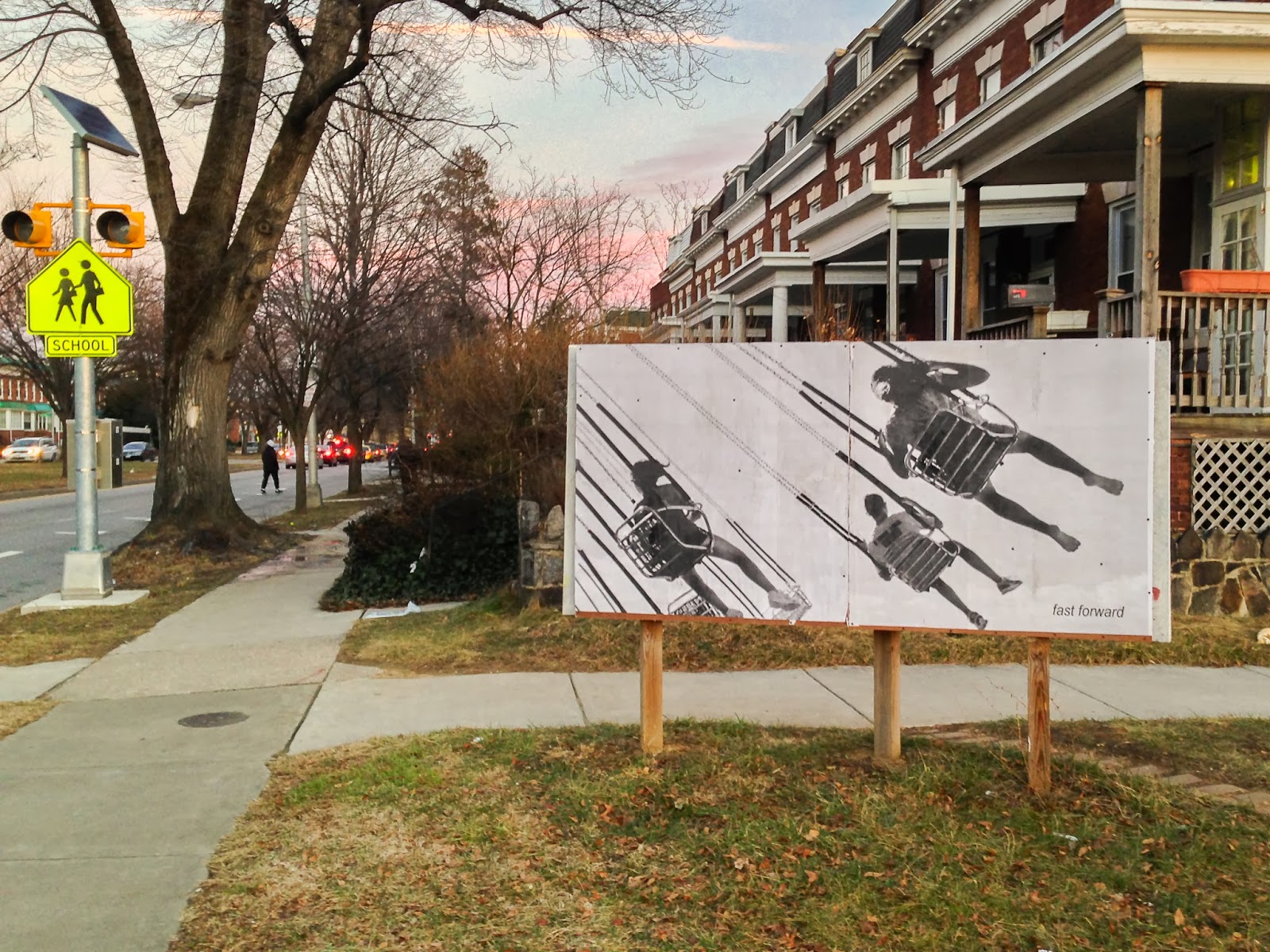 Info about the project from Anastasia:

Fast Forward
This photograph is of children on flying swings in Ocean City, NJ with the caption "Fast Forward."
The image and caption is a commentary on how too quickly life moves into regimentation without the enjoyment of simple pleasures; childhood into adulthood.  It's also the merging of traveling forward into the new year and enjoying life to the fullest.  My hope is that it brings a sense of lightheartedness and freedom in this new year to passersby despite the cold, dark days in January.

Anastasia's work will be up from now until the end of February.
Thanks for reading and stay tuned for more projects and events at Mirkwood in 2014!

Zoomscape / Where you stand... a visual report

"Where you stand depends on where you sit." 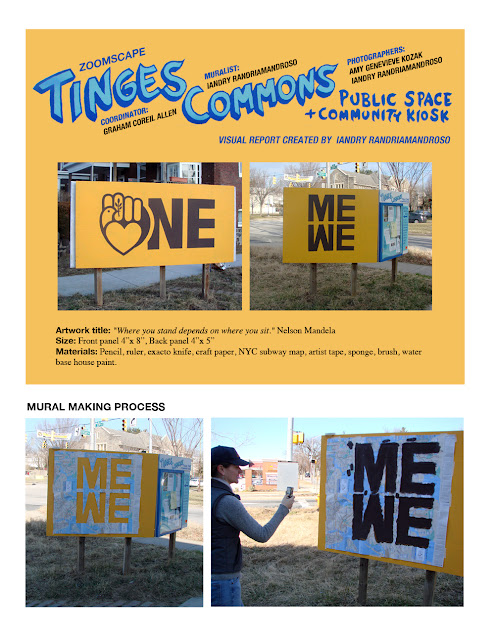 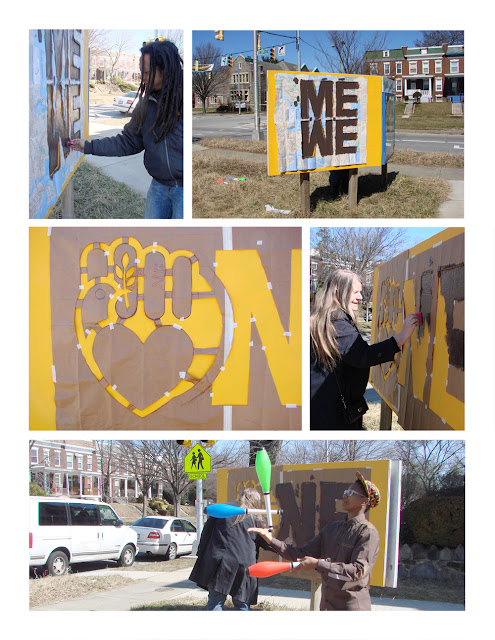 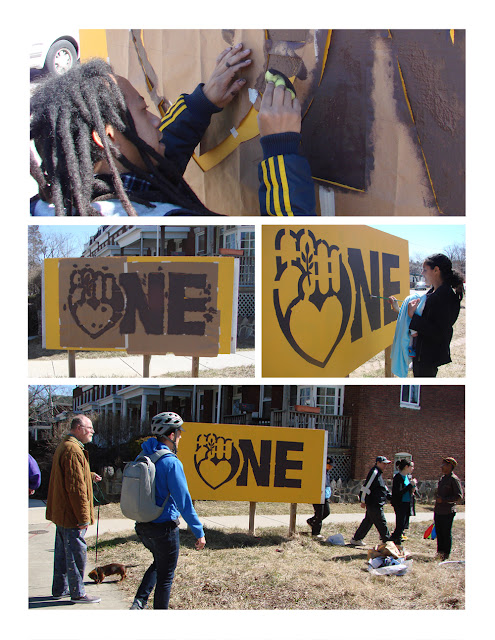 Posted by Graham Coreil-Allen at 1:21 PM No comments: 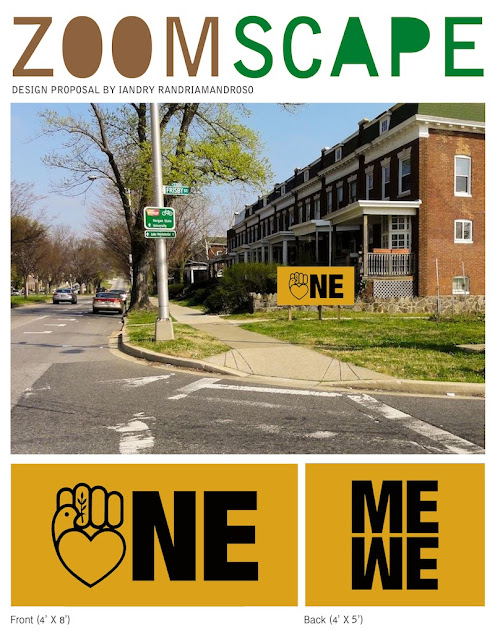 Title: "Where you stand depends on where you sit" Nelson Mandela

Iandry Randriamandroso is an independent contractor Graphic and Community Artist who lives in New York City. His goal as an artist is to create Art that is accessible and inclusive to everyone. He received his BFA from St. John's University (Queens, NY) in 2004 and his MA in Community Arts from the Maryland Institute College of Art (Baltimore, MD) in 2009. He also studied watercolor, mixed media and printmaking techniques at the Art Students League of New York, (Manhattan, NY) from 2005 to 2008. He specializes in graphic and mixed media art making that focuses on environmental and social subjects. Also he uses his artworks as educational tools to facilitate inclusive and hands-on presentations, community arts workshops, art classes and mural projects in public and private venues.
Artistic Philosophy:
Art is a visual language that connects people from different cultures and backgrounds. It encourages people to express themselves, and helps to build an understanding between people that can break cultural barriers.
Contact:
iandry@hotmail.com

You Will Save You / Artist Statement 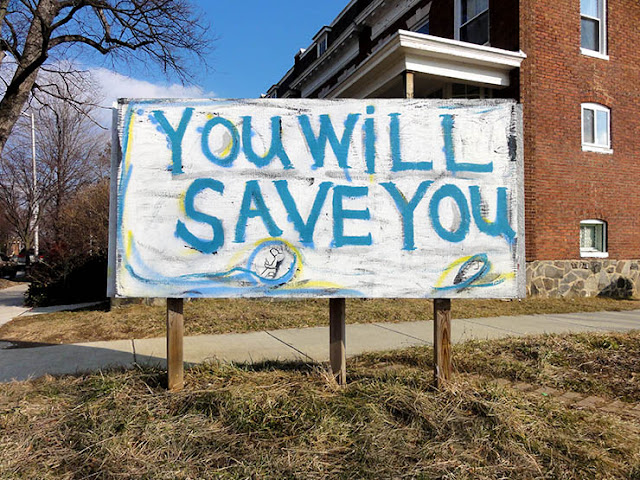 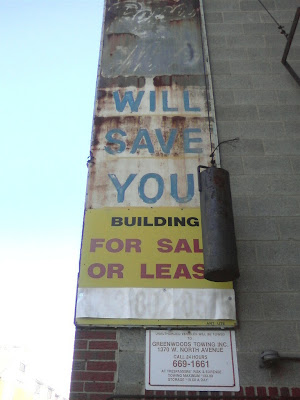 You Will Save You is a billboard style homage to a "ghost ad" that is one in a series of pieces I've done over that last 2 decades that remix simple publicly placed phrases and challenge social interaction and examination of the self and the need for external validation.   The original piece that inspired it is an ad in Baltimore City at 410 East Route 40, near Lexington Market that Reads “_____ Will Save You”.*  Once there was a word where the blank was, but over time nature eroded the full message.  Upon seeing it my first thought was simply “You”.  You Will Save You includes a raw iron oxide wash that should, over time begin to rust the message in a similar matter to the original, eventually obscuring the first You.  If the piece is censored the viewer will never get to experience the full piece as intended.
I'm inspired by artists, writers and theorists such as Robert Montgomery, Björk, Ron English, Ishmael Reed, Spencer Tunick. Gary Warne and Guy Debord but I purposefully choose to do pieces with less narrative that allow the message to be more fully interpreted and defined by the viewer.

The first piece in this series I (heart) NYC more than you was a reaction to Milton Glaser's iconic post 9/11 reaction to his "I (heart) NYC"...."I love NYC more than ever".   While Glaser's intent was to placate and support the public mood, mine was to remind NYC of it's edgy spirit.  What is Sleep?,Charlie Says**,  and my last 2 group shows, What is Green?** and If its Yellow focused on presenting local artists including developmentally disabled artists from the Providence Center in Brooklyn Maryland.  I've also created kinetic sculptures such as Two Goats Meet On A Bridge and Jazz Hand and a number of floats/performances for the Coney Island Mermaid Parade.  Goats was a tale of the dangers of poor mediation skills and Jazz Hand a simple celebration of movement and form.  All received awards, though that wasn't ever the point/focus.  I also had the luck to work with Spencer Tunick when I lived in NYC and while Rudolf Giuliani attempted to censor his and other artist’s works.   I had the pleasure of meeting Ron Kuby whosuccessfully defended Spencer’s right to speech, as art is an expression of speech.

As a war orphan and disabled veteran I hope my work inherently stimulates thought and potentially leads the viewer to participate in solutions that are internal, holistic and most likely to succeed.  A simple read of the piece could be that we are alone, in a godless disconnected world.  That is not my intention as I believe personally that we are innately connected to everyone and everything around us.  Hopefully it should inspire us to love and nourish the world, first focusing on the self as we are simply the most likely to achieve that goal.

I strongly believe that politicians who believe they need to protect people from simple messages that could be broadly interpreted should work on more crucial, life threatening issues.  I also believe it is crucial to realize that when individuals have strong negative reactions to simple messages like this piece the negativity comes from the realization of the challenge to change and removing the piece removes the stimulus and thus the hope for that change.

Quentin Gibeau is taking over as the primary contact and curator of the Tinges Commons Kiosk. Quentin is an experienced community artist, educator and current Mirkwood resident at 701 East 33rd Street. Anyone interested in proposing future projects for the Tinges Commons Kiosk at the southeast corner of 33rd and Frisby Streets should contact Quentin at gibeauq@yahoo.com or 859-802-0236.

Posted by Graham Coreil-Allen at 1:49 PM No comments:

Calling all artists, poets and pedestrians - submit your proposals for the Tinges Commons Kiosk at the southeast corner of 33rd and Frisby Streets in Waverly. Proposals for temporary artwork are only limited to the surface of the signboard structure and may include any type of visual 2d media, including murals, paintings, posters and simple words. Selected proposals will be on display for 4-6 weeks, reaching a large and diverse audience of Waverly pedestrians and 33rd Street motorists. The Kiosk is as your canvas offers two sides: the 4' x 8' board facing motorist traffic on 33rd Street and the 4' x 5' board facing sidewalk traffic along east side Frisby Street. While no budget is available for selected proposals, basic paint colors and some supplies are available from the Mirkwood collective.

Send your Zoomscape proposals to Graham at detourne@gmail.com.
Posted by Graham Coreil-Allen at 5:43 AM No comments: 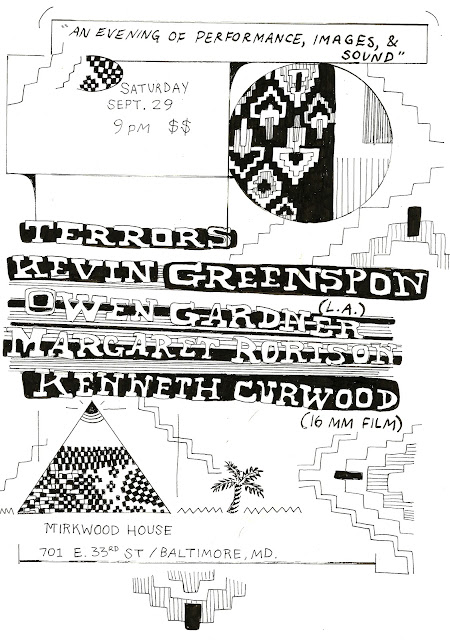 Posted by Margaret Rorison at 6:32 AM No comments: